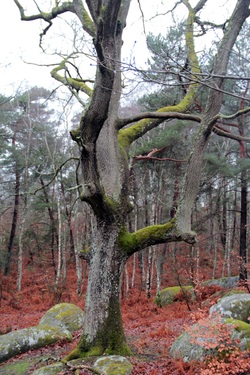 Far from the distractions of urban life and the noise of ambition, that is to say, not compromising one’s vision to the demands of the contemporary art market, the painter, Jean Whettnall, pursues a solitary quest of light. The singular strength of his style reveals a highly inspired man, an authentic artist.

Born July 12, 1953, Jean Whettnall grew up in Barbizon, that French village which gave its name to the “Ecole de Barbizon”, a world famous painting School. Since the 19th Century, the exceptional surroundings of Fontainebleau Forest, with its amazing rocks and centenarian trees, has attracted and inspired famous painters, such as Corot, Millet, and Theodore Rousseau….

Actually, Jean Whettnall’s family was always dedicated to art, with some descendants being well-known musicians and a mother, who was a concert pianist.  This double imprint of sounds and colors fed his early sensitivity. But, what could have been an easy avenue to recognition couldn’t satisfy his independent personality. In 1974, it was clear for him that neither the Music Conservatory of Paris, nor the “Beaux-Arts” would ever fulfill the urge to find his own path. At that point he had to jump for a bigger canvas. Leaving France at the age of 21, he first flew to Canada, and then traveled through the USA, living mostly in New York City and San Francisco. Not surprisingly, he settled in New Mexico in 1982, attracted by the light of the “land of enchantment”.

Jean Whettnall’s first watercolors and oils catch the beauty of landscapes in an impressionist manner. His predilection for trees is yet there. This period shows a sensitive and poetic approach to nature, that he will refine and structure later. It looks as if he had to tame his subject from the outside first—already expressing the secret paths of emotion, more than the anecdotal event of forms.

With maturity, his brush gets free of formal beauty, as his style turns to be more engaged in abstract expressionism. Still relying upon his favorite subjects: trees, rocks, mountains and vast deserts, he focuses more deeply beyond the skin of external realities. Landscapes become a mirror to cross, a gate to enter the subjective reality. This travel becomes his main purpose. Colors and structures on the canvas embody the forces of time at work in the vacuum of space. Animals—bear, buffalo…--or petrified forms, which then appear, seem to be empowered by the eternal sexual forces of nature, introducing a mythic dimension.

Human shapes merge with other organic shapes, as specters of another dimension, prints of the past or the future, as if Nature was dreaming of them trying to come to life. These fugitive faces or bodies, as part of the whole structure, express a strange violence--or humor(!), awaking the viewer to worlds he finds somewhat familiar yet unexplored. This is the kind of art that pushes you to become actor, by never getting just one interpretation, but rather a multiplicity, according to your imagination.

Because Jean Whettnall’s work evokes more questions than answers, his work does not lend itself to just background décor or what is temporarily fashionable. His paintings ask for our full attention, being products of a deep inner silence. These are extraordinary visions that belong to mankind: the illusory veil between what we hold as “reality” and what other dimensions really exist is pierced.